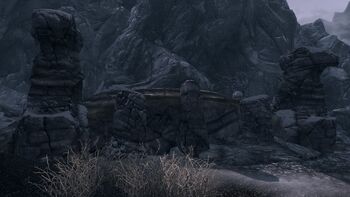 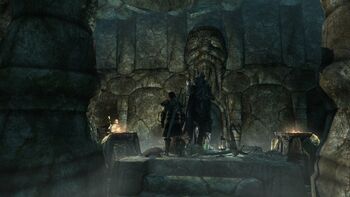 Ysgramors Grab is a Nordic ruin located west of the Akademie von Winterfeste. Entry to the interior of the tomb, beyond the entrance chamber can only be obtained when Wuuthrad is returned to the hands of its rightful owner, during Glory of the Dead.

It is the resting place of the hero Ysgramor. It is guarded by the ghosts of past companions who seek to kill all who enter. Past Harbingers who do not want to enter Hircine's Hunting Grounds will gather in the main burial chamber after being denied entry to Sovngarde.

The Dragonborn enters this tomb in an attempt to cure the spirit of Kodlak Weiß-Mähne as part of the Companion quest line. You will get Wuuthrad after the death of Kodlak Weiß-Mähne, but first will have to get the shards which the Silver Hands have stolen. After you get them back Eorlund Grau-Mähne will ask you to get the last piece which Kodlak kept very close to him. After that you will go to the Tiefenschmiede and Eorland will give it to you.

After saving Kodlak's soul, returning the statue room from the east, be sure to continue through the now open stone gate to the west, to exit out into Skyrim, up the face of the mountain. This previously inaccessible area features a Wortmauer for the Schrei Tierfreundschaft, and just north of the wall a Golderzader.

Opened-up tomb during Glory of the Dead: