Also known as "Altmer" in their homeland of Summerset Isle, the high elves are the most strongly gifted in the arcane arts of all the races. They can call upon their Highborn power to regenerate Magicka quickly. 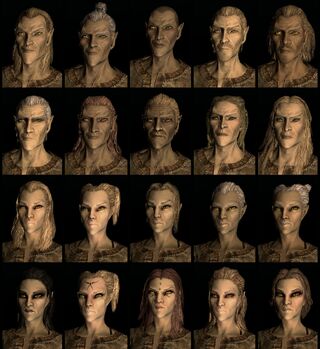 High Elves are one of ten playable races in The Elder Scrolls V: Skyrim. High Elves are famous for their amazing magical abilities. They begin the game with the spell Fury.

The High Elves, also commonly known as Altmer, are a race of Elves which reside in the region of Tamriel. The High Elves, or Altmer try their utmost to follow their ancestors which are the Aldmer in as many ways as possible, namely though, through traditions involving Marriage and Reproduction. High Elves are among the tallest of all of the humanoid associated Races, they are taller than most Humans and other Meri Races. The skin of the Altmer has a slight Golden tint to it, whilst remaining pale at the same time, however not as pale as the northern Human races such as the Nords or the other Imperials, but far lighter than that of the Bosmer. They are slender, with prominently pointed ears and almond-shaped eyes.

Altmer/High Elves are, on average smaller than humans in body size, which means that in general they are not as strong. Being very tall creatures, this makes them less Agile than the Bosmer, and therefore more vulnerable. Altmer are among the most intelligent and magically skilled races within Nirn, which surpass even the Bretons in magical ability. Magnus, the God of Magic is strongly tied between these Races which also gives the side effect of the Altmer being targeted with more magical attacks than most other races around Skyrim. However, through decades of selective breeding, the High Elves have inherited an extremely strong defense system against disease, almost as superior to that of the Argonians.

They disappeared towards the end of the Merethic Era, supposedly Trinimac was eaten by the Daedric Prince Boethiah. There was an enormous decline in the domination of Religion and Culture across Tamriel within the Altmer race during the start of the First Era and in the Present day, the Altmer which reside outside of Summerset Isle are more likely to worship the Gods of the Nine Divines rather than their own Gods for unknown reasons.

High Elves, or commonly known as Altmer are one of the oldest living Races within Skyrim, and one of the very early predecessors of the first Mer race, at which point moved through the Ehlnofey through to the divine et'Ada. High Elves, or Altmer are very proud of their Aldmer heritage, they work very hard indeed to maintain and keep themselves within this genetic line. The Elves are also fondly known by other races of Skyrim for their "snobby" behaviour, ironically so, "Aldmer" translates to "High Ones", which is often foreseen as being a rather high class race and which they rightfully act so. All through time on Tamriel, the Altmer have argued that they were the very first proper civilized culture of a race on Tamriel, through which many scholars find very difficult to prove otherwise.

High Elves can be most commonly found within the area of the Summerset Isles rather than any other location within Tamriel. Summerset is a large, inhabited island which can be found well off the South-East coast of Tamriel and also shares a border with Valenwood. According to ancient Scholars, the High Elves, or more commonly known as Altmer, fled their original location which was Aldmeris, named fondly after it's inhabitants, catastrophically sank into the Ocean. After this event, the Elves fled in different directions and can now be found all over Tamriel and Skyrim, however they still tend to stick to the isles rather than the mainland, and therefore becoming the automatic leaders of the Empire all throughout Tamriel, ruling over the Meri Empires. For the vast majority of the Merethic Era, the Elves whom resided on the continent of Tamriel considered the the king of the Altmer as their own ruler. However, this was not long-lived, as when the Camoran Dynasty within Valenwood was founded, this marked the start of the First Era and the beginning of the decline of the High Elf/Altmer domination of the continent of Tamriel. Although their domination of the continent began to decline, they still have rather a large amount of influence over the continent as the Altmer culture forms the basics of the Religious views, Language and even Architecture which are shared throughout the Empire.