Blackreach is a large underground cave full of dwarven ruins and bioluminescent plants. It can be accessed via three Great Lifts and by going through several other Dwemer ruins, including Alftand, Mzinchaleft and Raldbthar.

A small empty dwemer house and mushroom farm north-west of the Tower of Mzark.

A Dwemer ruin located on the mountains slightly south-west of Windhelm, between Lake Yorgrim and the White River.

A zone of the Blackreach dungeon found under the Dwemer ruin Alftand. 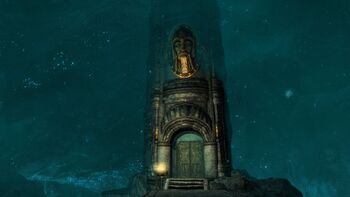 An abandoned Dwemer tower. This tower leads to a large chamber where there is another Dwemer Oculory. This one contains an Elder Scroll. Also in the tower are the following:

Initially, the only entrance to the tower is within Blackreach, but once exited using the lift, it can be accessed from Skyrim.

A small abandoned dwemer ruin found in Blackreach, north of the Pumping Station. Inside can be found:

A small Dwemer building in Blackreach. 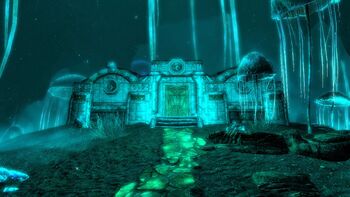 Sinderion's research station. Inside can be found the following:

Also, right outside the structure, near the door, is an Ebony Ore Vein.

The cave is significant source of ore: