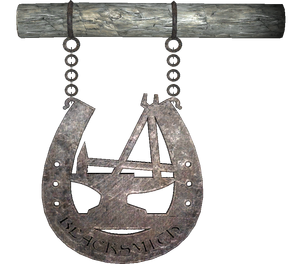 Blacksmiths are merchants that sell weapons, armors, and mining materials. They can be found throughout Skyrim, but most often in the capitals, cities, and towns.

They are most often found with smithing equipment such as forges, workbenches, grindstones and sometimes even smelters, and also sell smithing supplies such as leather and ingots, lockpicks, pelts, hides, weapons, and armor. However, not all blacksmiths own smithing equipment; some of them simply buy and sell goods.