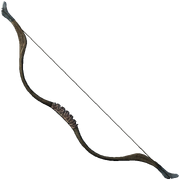 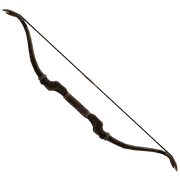 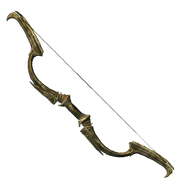 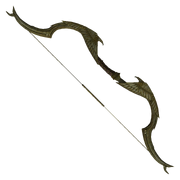 Bows are the main option for ranged combat in Skyrim. By using bows the player can attack enemies from a distance, damaging them before they are within melee range, and by that increasing the odds of winning the fight significantly. The target of an skilled archer may never reach melee range. The bows consume arrows when shot, but the player can retrieve these arrows simply by picking them up. Archery is one of the skills of the warrior branch.

This link shows an Excel page on damage per second (DPS) done by the various bows. The Longbow shows 11.06 dps and the Daedric 15.85. However this doesn't take into account the perk points required to get the full potential out of Daedric weapons. If we invest those same points into Archery damage we increase Longbow by 100% to 22.12 which is almost as much as Karliah's Bow which is 22.39. Karliah's bow is Ebony however it is already enchanted meaning you still need 5 perk points to get this bow (one for Arcane Blacksmith) and you'll be stuck with those enchants.

Combat with a bow[edit | edit source]

First off the "running backwards while shooting" tactic that you may know from Oblivion, does NOT work in Skyrim. The reasons are that the bows now take longer to pull back, and that if you want a powerful and accurate shot, you have to stand still. Furthermore you will be running very slowly backwards while pulling or holding a pulled bow. But don't give up! The bows in Skyrim are very powerful compared to the other games in the "Elder Scrolls" series. Here's a few tips for using a bow in combat:

Combat against an archer[edit | edit source]

(I - SimonHawk - am far from a pro, feel very free to add anything or change in this section if it worked in-game, especially the dual-wield part)

Being up against an archer can be a real annoyance, and especially when the archer has a warrior sidekick. Hunters with dogs aren't uncommon in the wild forests and the bold mountains of Skyrim, and bandits do often have an archer with them. The tactics against Archers is different from class to class, but here are a few of my favorites: