The Daedric Relic is a metal glove with the symbol of Oblivion in its palm. It sits in the middle of a summoning circle within the Midden Dark (in the lower parts of the College of Winterhold) with the remains of a failed summoning around it.

The Dragonborn discovers some notes lying nearby on a table, the Midden Incident Report, detailing the investigation of the failed summoning. The bits of evidence recovered from the scene can be found in the Investigator's Chest (master lock) inside the Arcanaeum. Upon retrieving the rings from the chest, the Dragonborn can return the rings to the relic to summon the Daedra trapped within. The combination is:

When the rings are in place, Velehk Sain is summoned by the glove. The Dragonborn can then choose to banish the Daedra or free him. Freeing him will give the Dragonborn knowledge of the location of his treasure, via Velehk Sain's Treasure Map, while banishing him will yield a Scimitar.

Note: It is possible to loot the treasure map off him if you are quick enough to loot his body before it disappears, giving you both the Scimitar and the treasure.

The treasure is located at the foot of a Talos statue, just to the west of the College of Winterhold, down near the water. As soon as the Dragonborn gets near the location the chests and other loot will become visible.

value (L60) only contains a pittance (dark developer humour). In total the treasure is worth 3060 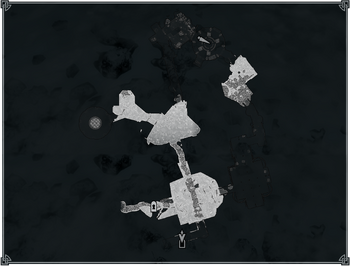