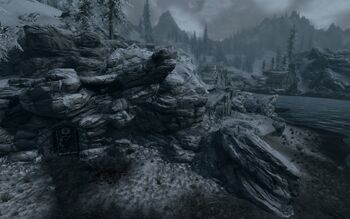 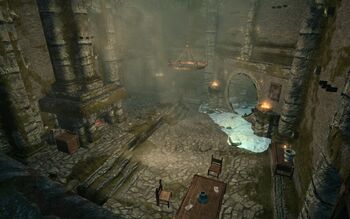 Inside the unrepaired sanctuary

The Dawnstar Sanctuary is an underground location north of the city of Dawnstar, the only other Dark Brotherhood Sancturary in Skyrim, unused for over 100 years.

Can be accessed for the first time during The Cure for Madness, when Cicero is tracked down by the Dragonborn, with opposition from Sanctuary Guardians (×12) and a named troll called Uderfrykte.

Note: A cave-in is blocking off some of the rooms in the very west of the Sanctuary at this point in time.

The Dragonborn can later return after successfully completing the Hail Sithis!. Once there, speaking to Nazir will initiate the quest Where You Hang Your Enemy's Head… which allows the Dragonborn to treat the sanctuary as a residence, complete with upgrades which can be purchased from Delvin Mallory.

During The Cure for Madness:

After Where You Hang Your Enemy's Head…, with all upgrades purchased: