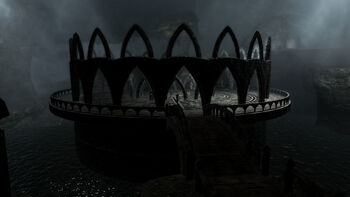 Dimhollow Crypt is a location featured in the Dawnguard add-on. It is located east of Stonehills, north of the Lord Stone. It is the location of one of the word walls for the shout Drain Vitality, as well as where Serana is trapped.

Inside the crypt are a number of vampires and their thralls, death hounds, as well as draugr and skeletons.

"Central to this huge cavern is an island of stone in a subterranean lake. Upon this island is something I can only describe as an elaborate ceremonial construction surrounded by stone columns linked by arches. There is no mistaking the stark contrast in architecture here; no ancient Nords made this stonework. Here, too, were more of the gargoyle statues that I first glimpsed in earlier passageways."

Lokil is one of the vampires guarding the central area. After solving the switch puzzle Serana is reawakened.

Note that a word wall can also be found here. Additionally, there are eight Malachite Ore Veins.