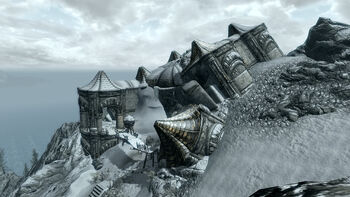 Fahlbtharz is located up the hill and to the east of the Water Stone in Solstheim. The entrance is guarded by Rieklings (×3).

Short corridor leading up to the next higher level of rotating gears.

A slightly tricky puzzle awaits, trying to set the pressure of the boiler to its optimum level.

Finally passing a three-switch gate the Visage of Mzund and a Kagrumez Resonance Gem can be found. The latter is connected to The Kagrumez Gauntlet, but can be picked up before taking on that quest.

An elevator exits to the top of the Solstheim mountains.

In the main part of Fahlbtharz two rows of five switches, require some trial and error testing:

The boiler pressure is indicated by a ring of lights arranged in a circle, a total of 20 such lights exist, indicating the optimum pressure that needs to be set to unlock the next gate.

There are a total of six resonators (three on the left and another three on the right) that need to be shot at with a bow to activate. From left to right they activate 3, 4, 6, 9, 13, and 18 blue lights on the board. Ulyn's Journal will help slightly.

The goal is to turn on exactly 20 lights, and the only combination to do so is to shoot the resonators for 3, 4, and 13. So the left two on the left, and the middle one on the right.

The three actuators switches require two additional Centurion Dynamo Cores, so take out those centurions and loot them. Then put the cores into the empty switches to unlock the gate.