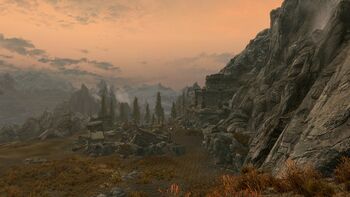 Fellglow Keep is a keep located to the south-west of Winterhold. The keep is home to a coven of mages lead by The Caller. The coven has since been destroyed by the Dragonborn on a quest to recover some stolen books.

Note: Initially both the Keep and the Dungeons can be explored, but only when playing Hitting the Books will a main chamber door in the Keep open up, and the Ritual Chamber become accessible. Neither Orthorn nor The Caller initially exist here.

The main chambers of the keep where the mages sleep and eat. There are alchemy and enchanting facilities in this section of the keep as well as a small, run-down library.

The dungeons are where the mages keep their prisoners. At present, the mages are keeping some vampires and wolves for unknown reasons. The three vampires can be released from their cells who then immediately attack the hostile mages. It is here that the Dragonborn stumbles across the kidnapped Orthorn. The dungeons are also home to a spell range where mages can practice their spells.

This is where The Caller resides. It just consists of a circular room with a magic circle on the floor and a pedestal in the centre along with two alcoves at 11 and 1 o'clock with pedestals in them too. The books of interest are: Night of Tears, The Last King of the Ayleids and Fragment: On Artaeum.

A door leading to a treasure chest in the back of the chamber requires the Fellglow Ritual Chamber Key that can only be collected off the body of The Caller (pickpocketing yields nothing).