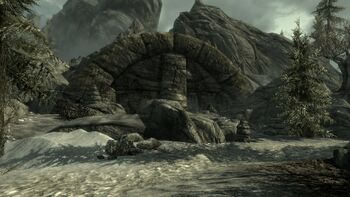 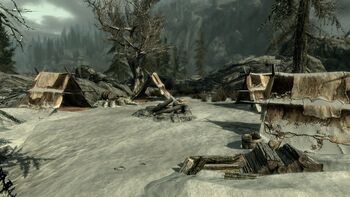 Folgunthur is a Nordic ruin located on the other side of the Karth River from Solitude, between the city and Ustengrav. It is inhabited by a few draugr, contains a door which requires the Ivory Dragon Claw to open and Mikrul Gauldurson as the boss.

The quest Forbidden Legend leads the Dragonborn there.

Just outside the ruin is Daynas Valen's camp, inside is his body.

This is a small abandoned camp (with bed rolls ×4) just outside the ruin containing Daynas Valen's Journal.

The Dragonborn finds five dead adventurers and many killed draugrs on the path through the tomb until finding the unfortunate dead Daynas Valen. The Ivory Dragon Claw is on his body, to get through the rest of the ruins and also Daynas Valen's Notes.

This is where the main opponent, Mikrul Gauldurson, and his draugr thralls are found. Killing Mikrul also kills any remaining thralls. On his body: Gauldur Amulet Fragment, Gauldur Blackblade and a Writ of Sealing (for Mikrul). There is also a word wall which has one of the words of power for the shout Frost Breath.