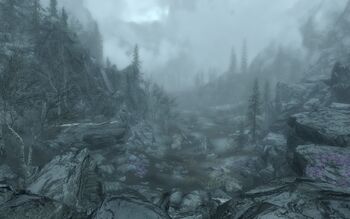 Entrance to the Forgotten Vale 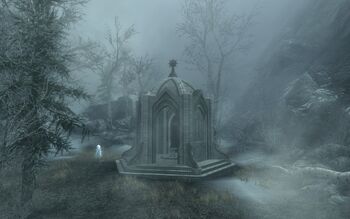 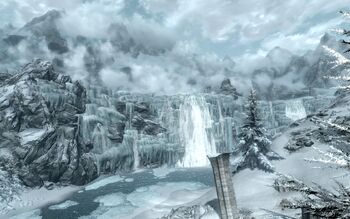 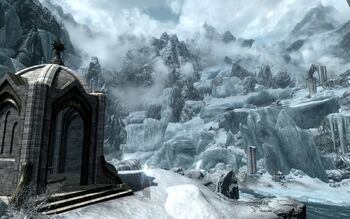 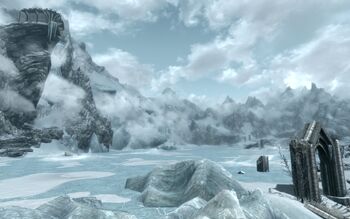 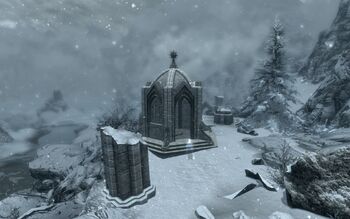 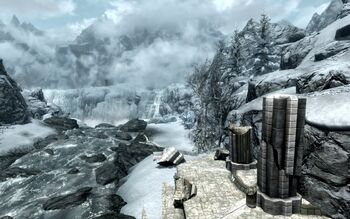 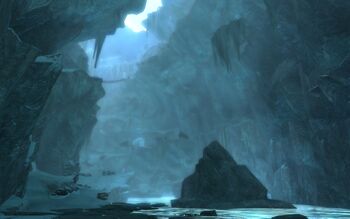 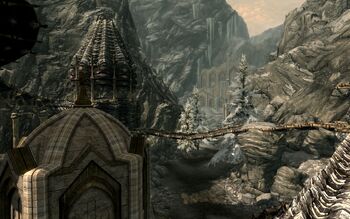 Wayshrine of Radiance and Inner Sanctum

The Forgotten Vale is a hidden region of Skyrim that is inhabited by Falmer. However, it once was a holy place to their predecessors, the Snow Elves, and houses a temple to the goddess Auri-El. It also contains a massive frozen-over lake and waterfall, where dragons are known to lurk, even underwater. It contains variants of almost any species known in Skyrim, including the otherwise unseen Frost Giants.

At the north-eastern shore of the frozen lake a word wall for the shout Drain Vitality can be found.

Shortly after entering the vale the Dragonborn will stumble upon a small cave, just north of the main path. In the cave a Rope Release opens up a hidden passage to the a Shellbug that can be mined for Shellbug Chitin.

Entering the main vale, turn north along the frozen waterfalls, upriver to find the Paragon Portal, that lets you place paragon gems (from Frost Giants), opening portals to various hidden areas in the vale.

The Forgotten Vale Overlook is accessed by using the Emerald Paragon at the Paragon Portal.

After the Wayshrine of Resolution, following the river upstream will lead to a cave connecting the river bed with the Falmer tents up in the mountains, this can be used as a short cut to avoid some of the Falmer resistance in the canyon. Another Shellbug can be found here.

On the roundabout path to the Inner Sanctum, the Glacial Crevice will need to be traversed. High up an otherwise inaccessible ledge can be explored via Paragon Portal by using the Diamond Paragon.

Located up the cliff at the south-eastern tip of the ice lake in the Forgotten Vale, reaching the sanctum requires taking a long-winding path through the vale. A secret room at the sanctum can only be accessed via Paragon Portal by using the Sapphire Paragon. A Shrine of Auriel can be found here.

Forgotten Vale (out in the open):