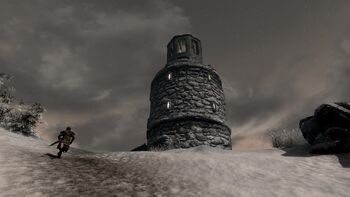 The Frostflow Lighthouse is located in the north of Skyrim, west of Winterhold and east of Dawnstar. Some potatoes (×4) and leek (×6) are being grown just outside. The lighthouse is the site of a quite gruesome family tragedy, where strange noises in the cellar turn out to be a deadly threat. Via the various journals and notes the story is told.

Inside there is a cooking pot and above it on the mantle, a Torchbug in a Jar. On the floor are the remains of Ramati, the wife of the lighthouse keeper, Habd with his journal.

In addition to the kitchen area, there are two bedrooms. The children's bedroom contains Sudi's Journal and a knapsack with Mani's Letter, and the parents' bedroom has a copy of Ramati's Journal.

The brazier is located at the top of the ladder upstairs at the lighthouse, along with a large chest requiring Habd's Lighthouse Key.

There are a few bear traps leading down to the cellar. In the cellar proper is a tanning rack and a number of barrels and shelves. There is also an opening in the wall leading to icy caves. There are also some chaurus.

The Frostflow Abyss is a series of icy caves where the bodies of Sudi (imprisoned) and Mani are found in a falmer (×6) camp. With Sudi are a Bloodstained Note and a Scrawled Page. A few Frostbite Spiders (×2) may also be about.

Further in is a chaurus (×12) lair, with a Chaurus Reaper that contains the remains of the lighthouse keeper along with Habd's Lighthouse Key.

The area is also a very rich source of both Glowing Mushrooms and Chaurus Eggs (×300+). There is also a Quicksilver Ore Vein here.

All the inhabitants of the lighthouse are deceased before the Dragonborn ever meets them: