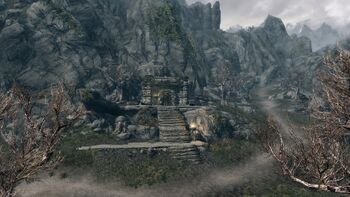 Harmugstahl is a fort carved into a hillside to the north of Karthwasten. Inside, the Dragonborn meets an adventurer fighting an enchanted frostbite spider. The adventurer mentions that all the spiders in the fort are enchanted and then leaves. Exploring six Frostbite Spiders and two giant ones are encountered.

Eventually, the Dragonborn finds the source of the enchanted spiders: one Kornalus Frey, an Altmer mage conducting experiments.

The fort also contains a journal on an alchemy lab table, one Iron Ore Vein, a copy of A Game at Dinner and a Shrine of Julianos on a dresser in the sleeping quarters.

There is one puzzle which uses four levers to remove a number of spikes from a doorway. When facing the doorway, the levers are as follows:

The aim is to remove all four spikes, i.e. switch the leftmost and the rightmost levers.