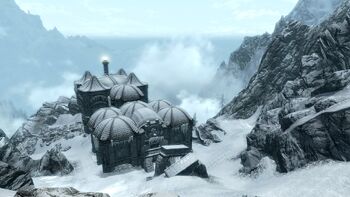 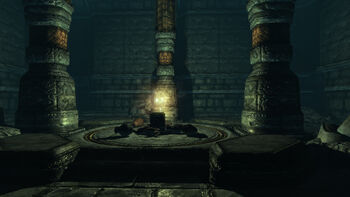 Kagrenzel is a Dwarven Ruin located north of Riften and south-east of Mzulft, at the extreme eastern edge of Skyrim. Just inside is a pedestal surrounded by bodies and a glowing Strange Orb suspended above. Touching the orb causes you to become imprisoned in the area with the pedestal and bodies for a short period, until the floor below you opens up and you plummet a great distance to an underground lake.

Note: It is possible to hit the walls of the chasm and be killed on the way down.

If you survive the fall (which mostly you do), there are some items of value to be looted from underwater chests and a couple of floating corpses.

Once out of the water, you find yourself in a system of caves populated by Falmer elves which ultimately lead out via Stony Creek Cave. In the first tunnel is a Moonstone Ore Vein.

At bottom of pit: