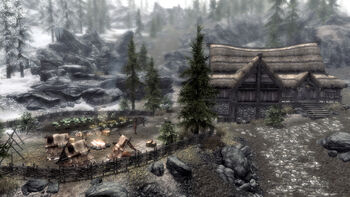 Kynesgrove is a small settlement located south of the city of Windhelm. The most prominent feature there is the Braidwood Inn where most of the residents live. Those who do not live at the inn, live in the small camp nearby. Many of them work in the nearby Steamscorch Mine.

During the mission A Blade in the Dark, the Dragonborn is sent to investigate the dragon burial site above the small settlement. The dragon who finds himself buried there is Sahloknir, who is in the middle of being reanimated when the Dragonborn arrives.

Focal point of the settlement is the inn.

The nearby mine seems to be in a precocious state according to Dravynea the Stoneweaver, her magic keeps it safe.