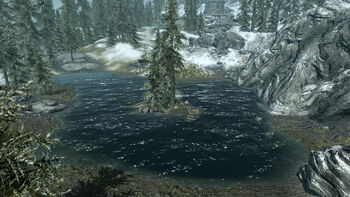 Mara's Eye Pond is a small lake to the east of Gallows Rock with an island in the middle. On that island a trapdoor leads to Mara's Eye Den.

Mara's Eye Den is a small cave accessible via a trapdoor on the island in the middle of Mara's Eye Pond. It is a smuggler's hideout.

According to the Smuggler's Journal found in the cave, the smuggler's were out for quick gold, told to transport a few crates. Curiosity getting the better of them, they found supposedly dead people, that they strip of all valuables. A deadly mistake, because in fact the "dead" were sleeping vampires. The two beds in the cave hint at two smugglers, one is found dead, the remains of the other slaughtered on a table. There is also a dead Vigilant of Stendarr in a semi-submerged cage.