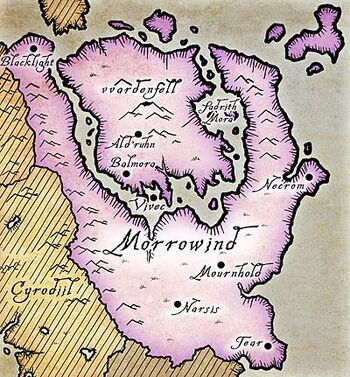 Morrowind is a province located in the north-east of Tamriel. It contains both the continental mainland and a large island, Vvardenfell. Morrowind is the original homeland of the Dunmer, also known as the Dark Elves.

In recent decades, Morrowind has become a volcanic wasteland. In an apocalyptic event, a massive series of eruptions effectively destroyed the landscape. The Dunmer would have perished if it were not for the intervention of the Daedric prince Azura, long held by the Dark Elves as their patron. Azura informed her most devoted followers of the impending catastrophe ahead of time, with sufficient opportunity to evacuate the population from the doomed land.

Many Dunmer settled in Skyrim, particularly in Windhelm; however they have found themselves targeted for discrimination and relegated to a ghetto, known as the Gray Quarter.