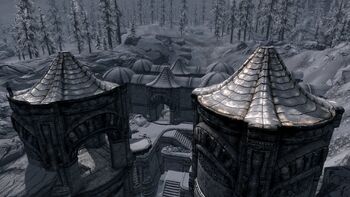 Mzinchaleft is a large Dwarven ruin located south-west of the city of Dawnstar. The exterior is guarded by bandits, inside the structure Dwarven Spiders, Dwarven Spheres, Falmer and even Chaurus await.

Outside the complex a note, the Mzinchaleft Work Order, explains Maluril Ferano's machinations with the bandits trying to loot Dwemer artefacts.

One of the bandits has Maluril's Room Key on his body, the room contains a copy of A Dance in Fire, v7 and Maluril's Journal. All over the place the broken Dwemer machines and the dead bandits tell a tale of struggle.

A lift leads to the Mzinchaleft Depths which are the home of Falmer. One table behind a locked door contains a full set of Falmer Armor.

The Gatehouse is guarded by a Dwarven Centurion Master and also houses a secret passageway to Blackreach which is opened using a dwarven mechanism. This is where Grimsever can be found as well, just right of the Centurion charging station.