Shrine of Mehrunes Dagon is a Daedric Shrine located near the Skyborn Altar. The shrine is dedicated to Mehrunes Dagon, the Daedric Prince of Destruction. The shrine's door will be locked (requires Key to Mehrunes' Shrine) until the quests of Silus Vesuius are done. To gain access to the interior of the shrine, the quest Pieces of the Past must be completed. 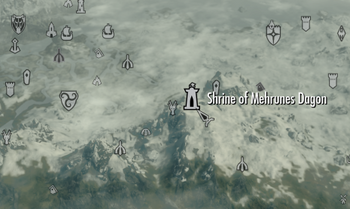 The shrine is located south-west of Dawnstar and south-east of Solitude.

You can find a path leading up into the mountains, just north of Hall of the Vigilant. The path has a stone marker and goes up steeply in a south westerly way and ends in a stairs up to the Shrine.

There is also another path south of Fort Dunstad leading in a westerly direction. Keep following it till you reach the stairs to the Shrine.

Four Dremora, two outside, and two inside.

All of the ingots and ingredients within the shrine respawn when the Daedra do, after about 7 in-game days.