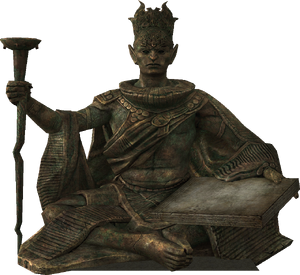 Snow Elves appear in The Elder Scrolls V: Skyrim add-on "The Elder Scrolls V: Dawnguard" as individuals. Snow Elves are the true natives of Skyrim. Similar to "High Elves" and "Wood Elves" corresponding to "Altmer" and "Bosmer" respectively, Falmer is the Mer name for "Snow Elf". However, most humans, and even the snow elves themselves, preferred the term "Snow Elves".

In the past, the Nord had forced the snow elves to live underground with the Dwemer who turned on the Snow Elves and fed them a poisoned fungus which made them blind. They are now known as the Falmer, creatures that do not like any other race except their own.

Existing snow elves with the original appearance of their people didn't live with the Dwemer but went into seclusion in a cave. Therefore, they were never poisoned and did not evolve into the cave-dwelling blind Falmer. Knight-Paladin Gelebor, a surviving snow elf calls the cave-dwelling descendants of his people "The Betrayed".

The great statue of Irkngthand is the only known visual representation of a Snow Elf, before centuries of subterranean slavery twisted the race into the vile Falmer.