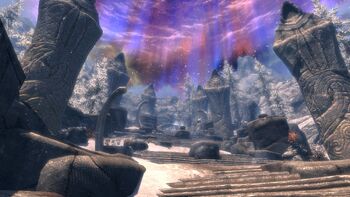 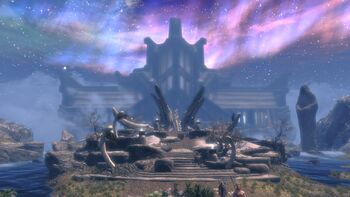 The Hall of Valor

Legendary and long-storied as the heavenly respite of the honourable dead among Nordic warriors, Sovngarde is the ultimate resting place of Nord dead. It has a topography that is highly reminiscent of Skyrim itself. At the centre is the start of a bridge composed of massive whale bones leading to the Hall of Valor with four main gates.

Before reaching these doors one encounters a keeper, an impossibly tall and massive warrior, Tsun. This individual vets incoming candidates by the ancient Warrior's Test: brief but brutal combat, in which the guardian fights with a war axe.

Inside the hall are found the greatest heroes of Skyrim.

Notable heroes in the Hall of Valor[edit | edit source]