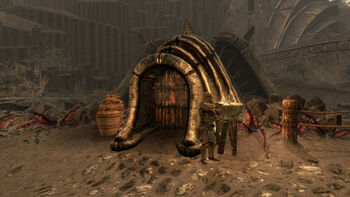 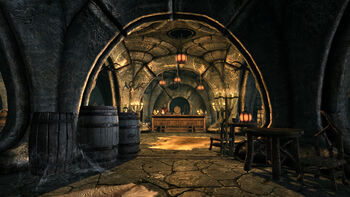 The Retching Netch is the inn in Raven Rock. It is owned and operated by Geldis Sadri. The bar has no resident bard but does rent accommodation.

The story behind the inn's name is described by Geldis as follows:

There's actually a funny story behind the name, friend. A few years ago, I was walking down by the docks and I noticed a Dunmer staggering along with a bottle of sujamma in hand. He was one of my patrons, and liked to drink heavily, so I wasn't exactly surprised. Ah, but you see this particular Dunmer was as naked as the day he was born and singing badly at the top of his lungs. As I'm watching this spectacle, a netch floats over the Bulwark towards him. The man looks straight up at the netch... yells "have a drink" and tosses the bottle... and it never hit the ground. Well, the bottle broke on the netch, and it must have swallowed its contents because it started floating sort of tilted. Finally, it stopped and began to quiver. A few moments later, the foulest liquid to ever assail your nostrils spewed from its maw. I've seen plenty of drunks in my day, and I'll tell you right now that netch was sick.