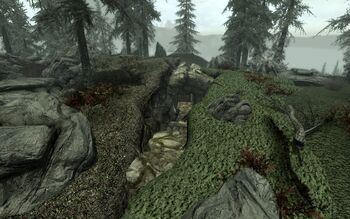 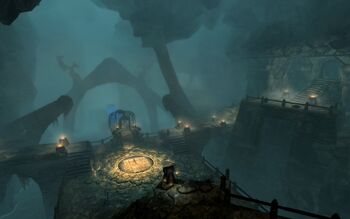 Vahlok's Tomb is a Nordic ruin located north-north-east of Ashfallow Citadel south-east and south-east of the Beast Stone.

Initially the tomb cannot be accessed since the entrance is still buried under rubble, only much later when taking on Lost Legacy can it be explored together with Tharstan.

Here the Dragonborn will face Vahlok the Jailor, draugr and quite a few Corrupted Shades.

In the main cave, carry (press and hold use) a draugr over the grate and pull the handle, a sacrifice, to open up the gates to the north and south.

On the southern path many draugr (×7) will attack. A central three-coloured column will then pose a puzzle: each coloured pedestal provides a weapon needed to unlock the next gate. So hit the outer ring "blue" stone with flames (via staff or spell), then use any bow and any arrow on the outer "green" stone, finally use any sword on the outer "red" stone to open the next gate. An Amethyst Claw, Left half and a word wall for the shout Battle Fury can be found here.

On the northern path more draugr (×5) await and a 3 by 3 grid needs to be activated by stepping on each stone but once. An S-shaped path starting at one of the corners unlocks the next gate, leading to another word wall for the shout Battle Fury, and the Amethyst Claw, Right half.

Use the two claw halves in the central chamber to unlock the path to the west. Down in the slightly under water pit below Corrupted Shades (×14) await any clumsy explorer who falls off the magic bridge-like pads. Putting both parts of the claw together unlocks the final large stone gate; alas the combination has to be guessed at. Top to bottom it is hawk, wolf and dragon. Here Vahlok the Jailor guards the last word wall for the shout Battle Fury.