Difference between revisions of "Whiterun (city)" 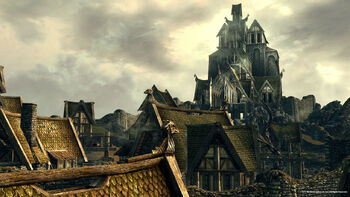 Whiterun is the most centrally located of the 9 Holds in Skyrim, named for the fortress city in the eastern part of its plains and just northwest of the massive Throat of the World, the highest mountain in all Tamriel. This area containing Whiterun and High Hrothgar used to be referred to as the "Imperial City of Skyrim", before it underwent several acts of chaos, including a dynastic feud, attacks by Hörme bandits and frost trolls, and a series of annihilating winters of alternating floods, droughts, and fires. A self-proclaimed priestess of Lorkhan, Jsashe the Witch-Queen, controls the county and the local witches' coven. It is interesting to note that the local giant population seems to use the tundra outside Whiterun as a pasture of sorts for their mammoth herds.

When first approached, a city guard will stop players at the gate and say, "The city is closed with the dragons about." There are a few options: offer him news about the dragon attack at Helgen, bribe him with 56 gold, or intimidate him by asking him to stand aside.