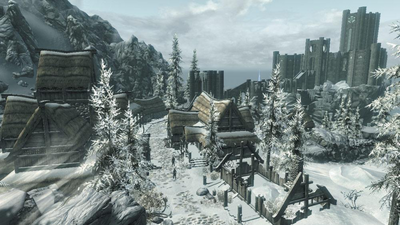 A city in Skyrim. One of the nine holds, Winterhold is ruled by Jarl Korir. It is most notable for the College of Winterhold, a school for the arcane art of magic.

Characterized by surrounding ice plains and a harsh winter climate, Winterhold is located east of Dawnstar and north-west of Windhelm. Due to its elevation and location near the Northern Seas, Winterhold experiences the harshest weather of the nine holds. Points of interest that neighbour Winterhold include the College of Winterhold, the Shrine of Azura and Saarthal.

Winterhold was once a wealthy and influential city in Skyrim, even considered one of the early capitals of Skyrim. It is home to the prestigious College of Winterhold. Before the Oblivion Crisis many Dunmer called Winterhold "home," and was a popular place of interest for many in Morrowind. After the Oblivion Crisis, those of the magical community were shunned because of the growing distrust of magic, due to magic causing the crisis in the first place. Many Dunmer left soon after, the rest following after the Red Year when Vvardenfell erupted and caused widespread destruction. Winterhold slowly faded from its former glory and finally met its demise during the Great Collapse, when the vast majority of Winterhold fell into the sea far below during a great and powerful surge of waved bombarded the coast. In the wake of the event was the College of Winterhold which remained miraculously unscathed. After the Great Collapse a fear and hatred for the College grew from the people of Winterhold who blamed the College for the destruction. What remains of Winterhold is but a shell of its former greatness. The Jarl, Korir, who has negative disposition towards the neighboring College of Winterhold and Dunmer alike.